This is a pictorial update with photographs taken by one of my partners at Roca Milagro, Philip Schlesinger. He toured Roca Milagro last weekend and took hundreds of photographs. I will share a very few of them with you here.
The first photo is of Miguel Bernard. He has been our official translator in Panama since we started our project. Here he is standing on one of the ubiquitous rocks at Roca Milagro. Phase one of road construction is nearly complete and there are still piles of rocks and soil everywhere. Once the roads are all in everything will be tidied up. The rocks are a beautiful and desired part of our landscape, but we will 'help' mother nature a bit by repositioning rocks to where they will look most pleasing and also use them to build various site features like benches, barbecues, etc. 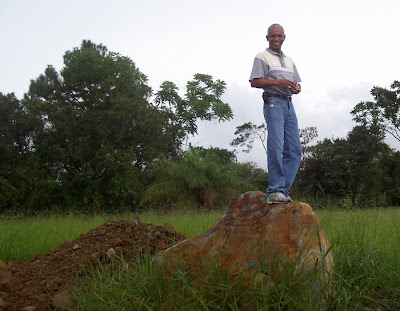 Below, Miguel is touring an area of Roca Milagro where the roads have been cut but where the cunetas (concrete channels alongside the road used to direct rainfall) are not yet in. Miguel, and Melissa, the client who is with him, are looking towards a ravine at the edge of our property through which the Rio David flows. Melissa is exploring building a spa at Roca Milagro. 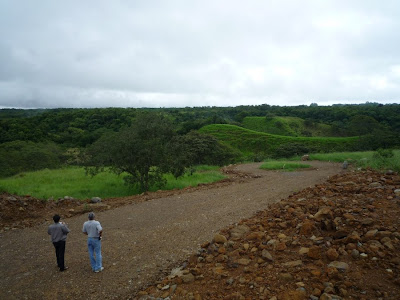 The next photo is of the Rio David as it flows through the ravine. Melissa takes a break and contemplates the beauty of her surroundings. 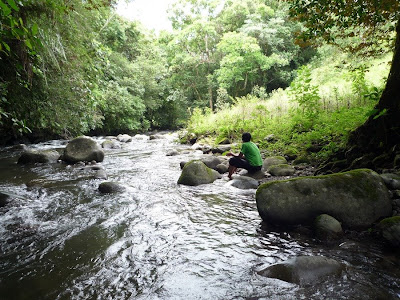 Our orange trees (all 400 of them) and a number of other tropical fruit trees reside in the grove shown below. Eventually there will be picnic areas with stone barbecues and benches and other features here. This, along with all of our other 'green' areas, will be open to all Roca Milagro residents. Want an orange (or a dozen) and a pineapple for breakfast? Help yourself. 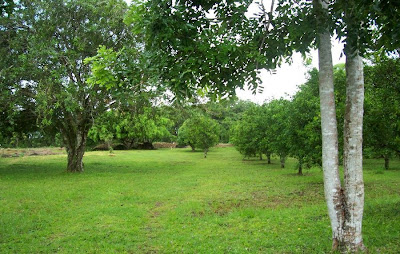 Until construction of homes begins, we are allowing our workers to graze their horses on our land. It helps keep the grass under control a little. Most grounds-keeping is done by a couple of fine lads named Jonathan and Prospero. Although we supply them with weed-whackers and other more modern implements, their tool of choice is still a machete. 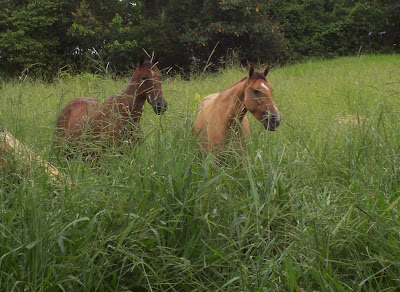 Below is the view from the nature trail that we have cut into the hillside down towards the Rio David. The trail runs through an area of pristine rain forest that is part of Roca Milagro and although we will make the trails user-friendly and safe, we intend to keep everything as much as possible in its most natural state. 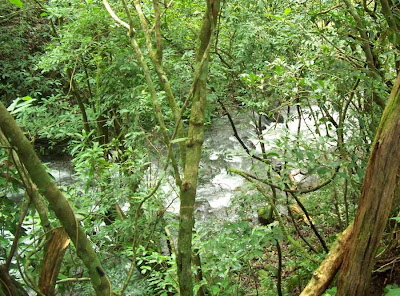 In the shade of the tree canopy overhead, the Rio David looks mysterious, almost like something out of a National Geographic rain forest documentary. 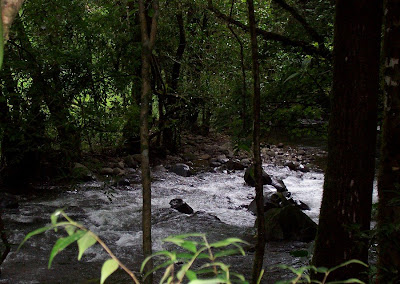 The photograph below shows an area where the phase one road is done, complete with the cunetas alongside the road edge. In phase two, the roads will get a layer of capa base, a fine gravel, and then a coating of 'double seal.' 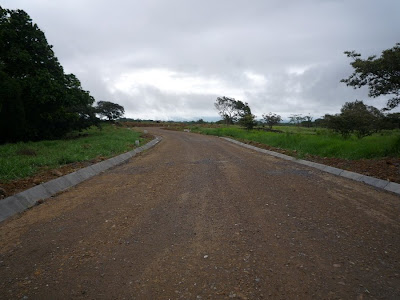 For more information, please feel free to contact me or our sales director, Philip Schlesinger.

Roca Milagro Website
Posted by Sieg Pedde at 8:57 AM

Roca Milagro is looking great Sieg! It's going to be a beautiful development. Nothing like those "houses stacked in a field" developments you see on the way up to Boquete.

Thanks, Sylvain. We are taking it nice and easy and are trying to do everything right as we go. I have been watching construction progress on your home as well on your site and it looks like you are going to be living in a beautiful setting. Nice to hear from you!

Sieg Pedde
Rovira Arriba, Chiriqui, Panama
Every project starts with a dream. This blog chronicles how the Roca Milagro residential community was born, beginning with Sieg Pedde's first visit to Panama in 2005.

Learn all about Panama generally, and our Roca Milagro development specifically, as Sieg and his partners in the project help Roca Milagro evolve into what will be a safe and beautiful place to live.

Promote Your Page Too

It all adds up!